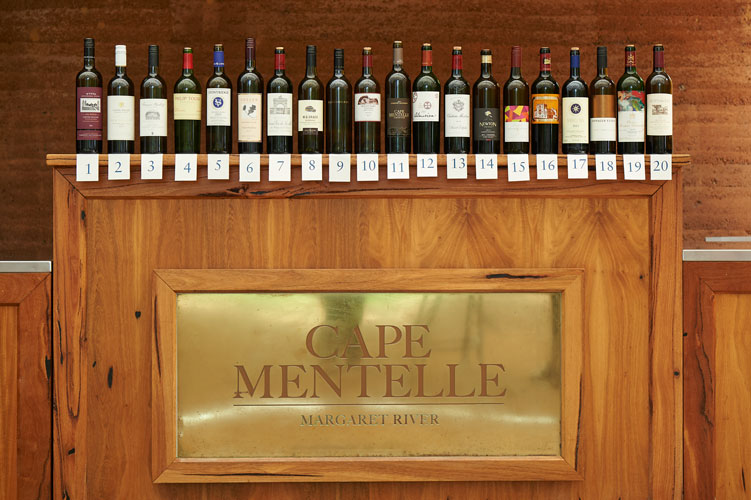 We have received some great ratings and reviews over the years. Check them out!

Cabernet Sauvignon Classified as "EXCELLENT" in The Langton's Classification VII The seventh edition of Langton's Classification of Australian Wines saw Cape Mentelle Cabernet Sauvignon ranking amongst benchmark quality Australian Wines: "The classic, age-worthy Cape Mentelle Cabernet Sauvignon, with its beautiful fragrance, purity of fruit, structure and vitality, has played a significant part in shaping Margaret River’s premium wine image. After winning the Jimmy Watson Trophy in successive years for the 1982 and 1983 vintages, it became a modern legend inspiring a whole generation of winemakers to succeed in their craft."

Cape Mentelle has some very expensive, but very effective, grape sorting equipment, and this may be part of the reason for the purity and the singularity of this beautiful cabernet. It's all there, all laid out for you, blackcurrant/cassis fruit, spicy/earthy undertones and perfectly ripened tannins standing guard over the fruit. The oak is subtle, but has been carefully orchestrated.

A blend of parcels from the Trinders Vineyard (great power and depth) and from the Chapman Brook Vineyard (nuanced, fine, floral characters). 50-70 days on skins; 21 months in French (80%) and American (20%) oak, 50% new oak overall. The result is a powerful, layered shiraz wanting to be a cabernet sauvignon, but isn't unduly put out by having to remain what it is.

Hand-picked, whole-bunch pressed, wild-fermented, held in bottle until release. It takes a millisecond for its flavour mass to reach every corner of the mouth. 14.5% alcohol? It looks much lower than that, but that doesn't mean for a moment it has any unripe elements in its makeup.

A really good wine that was (and remains) a trail blazer for long-lived SBS in the style of white Bordeaux. Barrel fermentation is an important part of the wine's style - when done well you get a wine such as this.

Well well well. This is a very nice wine.

Plum, red berries, ginger biscuits, dark chocolate, peppermint, flowers, nori etc. Medium bodied, silky and fluid, spice and earthiness, a bit of ‘minerality’ to the acidity and tannin, with a firm push of tannin on the finish, and forest berries, spice and perfume trailing away. Just lovely. Bespoke tailoring. An absolute charmer.

From the far south of Margaret River, fermented and matured in French oak giving it a luminous green-straw colour. It is every bit as complex as its vinification could give, filling the mouth with strands of flavours ranging from lemon to honey. But it's the power of the crunchy acidity on the finish that gives this wine its passport with unlimited rights of re-entry.

Hand-picked, 30% whole bunches, open and closed fermenters, on skins up to 80 days,  17-18 months in oak. There's a curious dusty licorice edge to the bouquet and an echo of the same on the medium to full-bodied palate.
There are no repercussions on the texture or structure, and this is, after all, a screwcapped bottle

This is pretty much spot on for a drink now (or later) Margaret Cabernet. Dark fruit, iodine and earth savoury edges, subtle vanilla oak and floral perfume. It’s medium bodied, supple and even in texture, with a density and presence, not least super drinking appeal that sets it above the pack. Oh, and the length is good too, with grainy tannin and fragrance lingering.

The wine has complex aromas and flavours, so much so that you might wonder whether if a small percentage was barrel fermented, until the clarity of the mouthfeel disposes of that idea. Two rivulets of flavour run happily along the palate, one with lemon citrus flavours, the other with green apple and gooseberry, tied together by crunchy acidity on the finish.